how bilingualism can help curb the current wave of nationalism

Am I French? Am I American? Am I Mexican? These are questions that I have been asked by others and asked myself countless times. My parents are Mexican, my sister and I are first generation American and we both attended the Lycée Français de New York. My school was taught entirely in French – other than our daily English class- and allowed students to obtain both American and French High School diplomas. Our school consisted of 1,300 students from pre-k to 12th grade; 30% were French citizens, 30% were French dual citizens, 30% were at least half American and only around 10% had both parents who were from neither the U.S nor France. I was a part of that minority. Everyone wondered why two Mexican parents had decided to send their daughters to a French school, while having no French background or remote knowledge of the language. Why had my parents not simply sent me to an American school?

My parents chose to send me to a school in which only a handful of my classmates knew what the word “integer” meant before SAT prep started Sophomore year. We had done of advanced math but it had all been held in French. None of my French standardized test scores mattered to American colleges, and most of my friends went back to Europe after graduation. I was obligated to take the TOEFL exam. Yet, my parents found these issues trivial compared to the benefits of my bilingual education experience. They valued diversity more than most of our skeptical American family friends did, and rightly so. People seemed to make different assumptions about my nationality based on the environment we were in: I was French-Mexican when with my American friends, Mexican-American  in school, Mexican to the Americans and American to the Mexicans. Despite the confusion, I could communicate both verbally and culturally with a much wider variety of people than most of my friends could from a very young age. I learned to embrace diversity in a way that opened my eyes to a very different perspective on the world. But why does this matter today? Many of the anti-globalist problems present in our world today stem from nationalistic and racist views on immigration, inclusion and violence. This wave of nationalism has led to a resurgence of ignorance to the benefits of multiculturalism. Though these problems are in no way easily nor rapidly solvable, a productive step in the right direction is bilingual education.

The History of Bilingualism

In the late seventeenth century in the United States, bilingual education was common practice. When the first colonists were arriving to the United States, most were still teaching their children in their native language, especially Germans. A shift then occurred in the late 1800s: the rise in nativism and large wave of new immigrants at the turn of the century. This shift mixed with the start of World War I led to bilingual education being replaced by efforts to make schools feel more anti-foreign. (8)

In the late twentieth century, many parents, particularly immigrants, were opposed to sending their children to bilingual schools. This stemmed from a stigma against non-assimilated individuals in society. According to a book written in the 1970s by Barry McLaughlin, Second-language acquisition in childhood, “various ethnic groups strive to maintain their identity by raising their children bilingual.” (18) In this case, however, bilingualism means that the child only speaks the non-English language at home, never outside. The book explains that this is due to bilingualism being “a social problem because language is so intimately a part of one’s identity. The distrust shown by many people and governments toward bilingual individuals stems largely from the feeling that they are not loyal citizens because they can speak another language.” (p.2). This belief was developed after a long period of war, which involved the US developing its military more than ever, and segregation. This state of war, increased nationalism and decreased multicultural education. (18)

The combination of these things lead to a nation-wide distrust towards those who weren’t patriotic in every respect including language.  As Barry McLaughlin’s book states, “This hostility toward bilingualism has nothing to do with language as such. The hostility is directed not at language but at culture. The bilingual represents an alien way of thinking and alien values” (p.3). This provides insight into the mentality of people in the 70s, whose insights were influenced by nationalism and lack of exposure, leading to racist thoughts. McLaughlin, though unintentionally, also seems to further the idea that being introduced to a different language- and by extension its culture- at a young age produces more open-minded individuals who don’t view the “bilingual” as having an “alien way of thinking” but rather as a person having a different opinion or view. (18)

Our world has become significantly smaller thanks to social media. Bilingualism has become increasingly possible with this potential for instant communication. The graph below, taken from “The DANA Foundation” website under the “Cognitive Benefits of Being Bilingual” article published in 2012, shows us that from 1980-2007, there was a substantial increase in the percentage of people in the US who spoke a language that wasn’t English at home. (9)

Today, a larger portion of the world’s population is bilingual or  multilingual than monolingual. Research has proven that there are certain benefits that have come up time and time again for kids who learn a second language. Harvard’s associate professor at the Graduate School of Education said that “Bilingualism is an experience that shapes our brain for a lifetime”. The main advantages identified so far include attention, school performance and health benefits. (1)

People who speak two languages often outperform monolinguals on general measures of academic performance. “[Bilinguals] can pay focused attention without being distracted and also improve in the ability to switch from one task to another,” says Professor Antonella Sorace – a linguistics and english language expert. (9) According to the DANA Foundation, this is due to the cognitive developments that occur, which allow for individuals to “inhibit one language while using another.” (6) 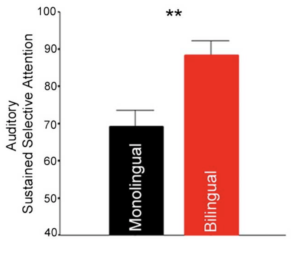 The graph represents the difference between a monolingual and bilingual individual to have sustained attention. 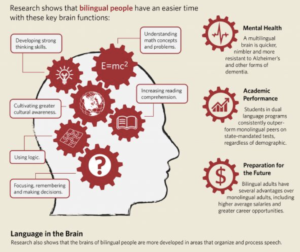 This graph provides visual evidence in favor of the idea that the brain developments that take place due to bilingualism have strong benefits towards one’s academic performance. This is due to the “thinking skills”,  mathematical understandings , logic and focus as is demonstrated in the graph. Furthermore, bilingual children, when switching between languages, must follow social cues in order to know which language to speak to whom. This need for accentuated social understanding leads to hyper-developed fundamental social and emotional skills with kids starting at around 3 years old. On top of these social abilities, kids who speak more than one language have been proven to be better English readers than native English speakers due to their puzzle-solving talent. (4) (11)

The health benefits of an individual who is bilingual are the most tangible of the advantages. Due to developments in the brain that take place during the learning of a second language, one’s memory is deeply strengthened. This increase in memory, has been proven to delay dementia in patients who have a predisposition to the illness. Doctor’s have found that, though the average age of dementia patients during their first doctor’s appointment is 71.4 years old, that of bilingual patients is 75.8. This might not stop the dementia from occurring but it allows for an incredible delay that provides a longer period of health and normality in a patient’s life. (4), (6), (7)

There have been several policies in the past that have tried to establish some momentum in furthering bilingual education. Today, it seems that despite the time that has passed, we may be moving in circles.(12) In 1923, thirty-four states passed laws mandating English as the language of instruction in public schools. This ended any possibility of establishing a curriculum in which English Language Learners (ELL) would be able to learn the core courses in their native languages ( mostly catered towards Spanish speakers), while taking English classes. (14)

In 1974 the case Lau v. Nichols, a class-action suit brought on behalf of Chinese students from San Francisco, went to the Supreme Court. (16) Most students were not receiving the special instruction that they required due to their inability to speak English. The Court decided that these students “were not receiving equal educational opportunity because they did not understand the language of instruction and the schools were not doing anything to assist them.” (17)

There has never been a mandate requiring bilingual education. The courts and federal legislation–including Title VI of the Civil Rights Act of 1964, which “prohibits discrimination on the basis of race, color, or national origin in federally assisted programs and activities”, and the Equal Educational Opportunities Act of 1974, which “defines a denial of educational opportunity as the failure of an educational agency to take appropriate action to overcome language barriers that impede equal participation” are contributors to the progress that has been made in favor of students who are not fluent in English. (4)

Today, though president Trump hasn’t established specific policies referring to bilingual education, he has spoken extensively about his feelings toward immigrants and his plan to “make America great again”. As his slogan has been analysed time and time again as meaning “make America white again”, there have been predictions that he will not further the pre-existing programs. There have also been concerns about him entirely stopping the ones that already exist. (6)

After researching all of the beneficial aspects of bilingualism, it has become increasingly clear that speaking multiple languages can have positive consequences for everyone, not simply those who speak the languages. Certain benefits identified include strengthened memory, delayed dementia, increased attention span, and academic excellence. However, these are no more important than the more social-based gains, which include cultural understanding, inclusivity and the ability to communicate with a larger group universally.

Due to these social benefits that could occur, the Supreme Court should continue to uphold the rights of non-native English speakers. This should happen for various reasons. FIrst, for the sake of humanity; it must be reminded that regardless of their fluency in English, immigrants are still people and contribute extremely positively to the community. Second, the United States is a country built on immigrants from all continents and backgrounds who unified in order to create a country built on liberty and equality. Third, the United States should make it easier for the motivated, innovative people who chose to move to this country in order to make change. For these creations to take place on US soil is good for the country.

Furthermore, congress should pass a policy to quell these nationalist sentiment by encouraging bilingual education. Education is supposed to enrich an individual both intellectually and socially. Becoming a more well-rounded individual and being more culturally aware are things that will benefit a student far beyond his/her school days. These are things that can create an even smaller world and can  allow the violence to lessen. Having gone to a foreign, bilingual school has presented me with the largest diversity of friends, languages and cultures than I could’ve ever imagined. This has created an inclusive nature within me that was developed from the time I was 3 and has kept developing every day since. More kids could develop the same strength.

(14) Department of Government Funded Programs and Board of Education of the City of Chicago. “Bilingual- Bicultural Education.” Print.